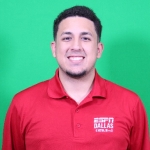 If you are looking for the latest on E-Sports, Kevin Correa will have you covered with the Free 2 Play Podcast on Sunday Mornings from 10-11am – the only live radio show in Dallas-Fort Worth sports radio talking about one of the fastest growing sports in the country.

Kevin Correa, born in Arecibo, Puerto Rico, a native of Arlington, Texas, has always been minutes away from attending games at the Ballpark and aspired to do something in sports media when it was discovered he himself was pretty awful at playing said sports.

He found himself in a radio booth at Ben Barber Career Tech Academy, leading the students own morning show in Mansfield ISD. After graduating from Timberview HS he attended Tarrant County College and later graduated from the University of North Texas with his Bachelor’s. Along with his studies, he became involved with country music and sports talk radio out of Cleburne, TX before landing at ESPN Dallas Radio.

At ESPN Dallas, Kevin has prided himself as a SportsCenter anchor and one of the men behind the glass for the Dallas Mavericks Radio Network. He hopes to expand coverage of esports locally and nationally with his Sunday esports show known as Free 2 Play.

Away from the studio Kevin enjoys spending time with his new wife, Shelby, and of course with his boisterous Puerto Rican family. WEPA!