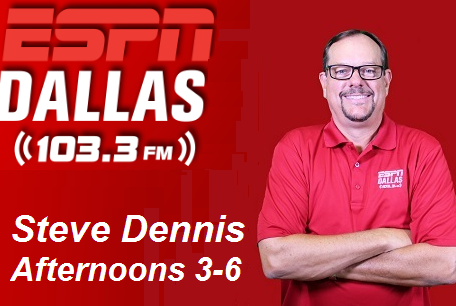 Join Steve Dennis weekday afternoons from 3-6 as he sits down with a rotating cast of ESPN Insiders and personalities like Tim MacMahon (ESPN NBA Insider), Todd Archer (ESPN Cowboys Insider), Clarence Hill (Cowboys Beat Reporter for the Ft Worth Star Telegram) and others each afternoon as he drives the conversation forward in DFW with the kind of insight and conversation you won’t find anywhere else – making your evening errands or trip home from work just a little bit better.
– – – –

Steve Dennis knew he wanted to be a Sports Broadcaster ever since he was 14 years old.

Now 34 years later, Steve has done it all, including 17 years at KTVT Ch 11/KTXA Ch 21 as a reporter and anchor. Working “inside the walls” of Valley Ranch on Dallas Cowboys TV and Internet projects as well extensive radio experience on 103.3 FM ESPN. He’s gone from Joplin, Mo to Altus, OK, Kansas, K State and even had a stint in Wichita KS calling Wranglers and Wings games.

And this is his second stint on the ESPN Radio in Dallas, he co hosted a show on the station in 05-06 on. Add up all the years of making contacts, working sources, asking questions, writing and telling stories, anchoring sportscasts, giving opinions, calling games and I hope it equals a radio talk show host properly equipped to handle ALL discussions. And that is what I love most about my career in sports broadcasting. Steve required his bio include the fact that he graduated with a Journalism degree in 1982 from the School of Arts and Sciences from THE Ohio St. University.

Add it all up and it equals a radio talk show host that is properly equipped to handle all discussions that come up on the air. And that’s what Steve Dennis loves most: The debate and the discussion with Cowlishaw, athletes, coaches and owners and the listeners.