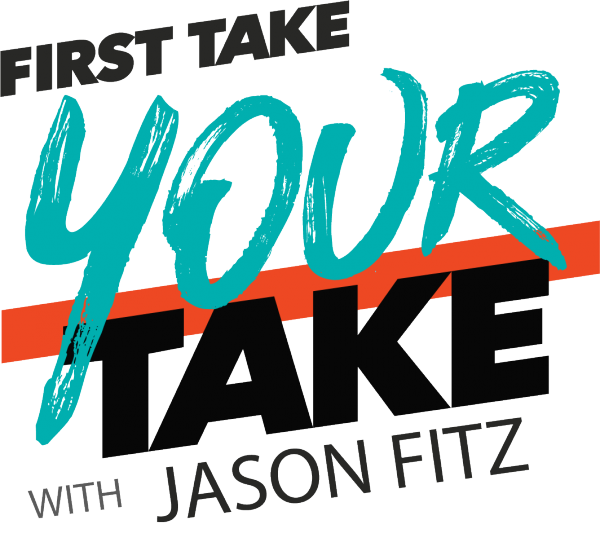 Every morning, Stephen A Smith and Max Kellerman debate the hottest stories of the day as only they can on First Take.  The debates expand further as Jason Fitz brings First Take, Your Take to ESPN Radio 103.3 FM from 1-3pm.

Agree? Disagree? This show is about your thoughts and your reactions. Be a part of the discussion, it’s First Take Your Take with Jason Fitz.  First Take has the best debates about the biggest stories of the day. First Take, Your Take takes those discussions and makes them even more interactive.

Jason Fitz is a regular contributor to ESPN Radio’s marquee, weekday morning drive show, Golic and Wingo on ESPN Radio (6-10 a.m. ET) with simulcasts on ESPN2 (6-8 a.m.) and ESPNEWS (6-10 a.m.). He also hosts First and Last every weekday morning on ESPN Radio from 5-6 a.m. His multi-platform presence continues as Fitz is also one of three hosts for ESPN’s SportsCenter on Snapchat, a twice-daily digital sports show that debuted November 13, 2017 and features a mix of the latest sports news, highlights and commentary. In addition, Fitz is a regular fixture on ESPN’s social media shows surrounding marquee events and key announcement shows such as the Super Bowl, NFL Draft and College Football Playoff Selection Show.

Fitz, who joined ESPN in August 2016, also co-hosted ESPN Radio’s Spain and Fitz, alongside espnW signature voice Sarah Spain from January 2018 to May 2019. Prior, he hosted the weekend ESPN Radio show Jordan Rodgers & Jason Fitz with SEC Network analyst Jordan Rodgers, as well as the local Braden & Fitz program on ESPN 1025 The Game in Nashville, which ran from August 2016 until December 2017. He has also hosted a variety of college football programming across ESPN’s platforms including CFB Daily on ESPNU and the Twitter exclusive Rankings Reactions with Mike Golic Jr.

Fitz was previously a member of the chart-topping country music group The Band Perry, serving as the band’s musical director and fiddle player. A GRAMMY-nominated artist and acclaimed multi-instrument musician, Fitz studied classical violin at The Julliard School