It’s a fresh way to spend your Saturday afternoons from 2-4pm: with two up and coming personalities in Saad Yousuf and Harrison Graham on 103.3 FM ESPN. Listen as Saad (also of The Athletic) and Harrison Graham (also of ChatSports)  bring their unique brand of energy, insight, and analysis on the biggest sports stories in Dallas-Fort Worth right after The Saturday Sports Brunch 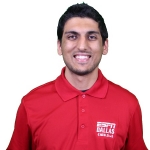 Ever since he was an eight-year-old on a playground, Saad Yousuf has had the dream of being in the NFL. He grew up playing quarterback all the way through high school, at which point he realized the chances of a 5’7″ player making a career behind center in the NFL was very unlikely.

Saad graduated from Creekview High School and then attended the University of North Texas, where he graduated from in 2017 with a degree in journalism. At UNT, Saad wrote for the school newspaper and appeared on the school television station, covering football, basketball, softball, track, tennis and soccer.

Saad grew up in Carrollton and has watched the DFW sports landscape closely for the past two decades. He’s been serving a variety of roles at 103.3 FM ESPN since April of 2015. After working at the Dallas Morning News for two years, he is currently a general assignment reporter for The Athletic in Dallas. He covers the Cowboys, Mavericks, Stars and Rangers.

Saad is consistently in the locker rooms, interacting with players, coaches and executives as he covers each team. Each sport brings a different flavor to the table and Saad enjoys taking in all of them.

In his free time, Saad is probably watching The Office for the millionth time or Harry Potter movies for the thousandth time. 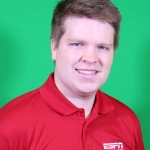 Harrison Graham knew at a very young age he wanted to do something in sports as he watched games every night with his dad especially the Cowboys in Sundays. It wasn’t until he found the Sports Broadcasting program at TCU, that broadcasting was the route he wanted to go.

Harrison joined 103.3 FM ESPN in the spring of 2016 as he was finishing his degree and has worked his way up the ranks. He made his ESPN hosting debut in March of 2017 and has been a regular part of the ‘ESPN Game Night’ rotation since then.

Harrison does a variety of other things for the station including producing shows such as the Cowboys pregame and post game shows the last 3 seasons. He’s served as the weekend Mavericks producer as well. Harrison also regularly has board op shifts where he runs the board and anchors Sportscenter updates. He also reports on a variety of events and games in the DFW metroplex.

Harrison prides himself on versatility, but hosting shows is what he loves doing most. Whether it’s the latest on the Cowboys, Mavericks or anything else, Harrison has an opinion on it and isn’t afraid to speak up.