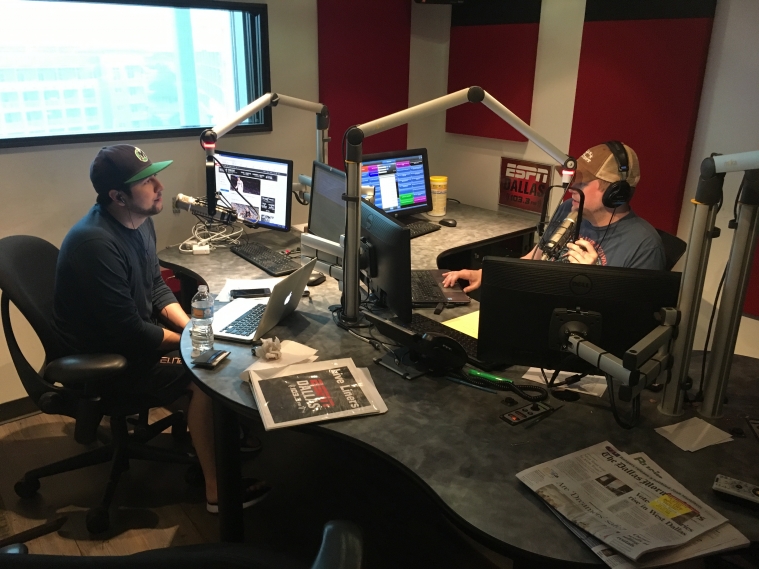 Matt McClearin has been in radio his entire adult life including a prior stint in the market, serving as the pre and post game radio host for the Dallas Stars. Most recently Matt spent four years in Birmingham, Alabama as a daily sports show host on WJOX 94.5.

A native of Rockwall, McClearin went to college at Texas State University. Matt is a true fan of all Dallas sports team and is not afraid to be a homer. Additionally he is a craft beer aficionado who enjoys Texas country, IPA’s, extraterrestrial encounters and living the adventure.

DJ Ringgenberrg was born in Duncanville Texas, raised on Dallas Sports Radio. A graduate with a degree in journalism from the University of Iowa, DJ worked in various capacities around the DFW market before landing with 103.3 FM ESPN

His current station responsibilities include reporting on the Cowboys and Rangers, 11-6 update anchor and board operator for J Dub City and Dennis and Cowlishaw, ESPN Game Night rotating host, as well as the occasional fill in roll on the ESPN Mavericks Radio Network.

In his free time, DJ enjoys spending time with his family, live music and accepting all pickup basketball challenges. You can follow him @DJR1033 or email him at DRinggenberg@Cumulus.com.