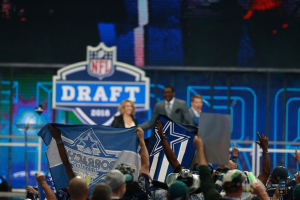 It was once just a childhood dream.  But now, for some of the most talented football players across the country, it’s a real opportunity to change their lives and maybe even shape the future of NFL franchises and fans. Here’s your chance to be part of the magic of the NFL Draft with 103.3 FM ESPN Radio morning show host Trey Wingo!

Golic and Wingo are sending two (2) lucky fans to the 2019 NFL Draft as league insiders. Winners will attend two live Golic and Wingo broadcasts, explore the city with Nashville native and friend of the show, Jason Fitz, and his buddy Mike Golic Junior, then sit in as Trey prepares for the biggest night of his year as ESPN’s host of the NFL Draft.  Finally, our winners will cheer along as the lives of these athletes forever change, with VIP seats for the 2019 NFL Draft!

So how do you enter to win this amazing 5-day, 4-night experience? Listen to Golic and Wingo (5am – 9am) starting Thursday, March 28th through Wednesday, April 10th for the draft-themed “Winning Word.” Then, when you hear that winning word, text it in and you could be one of the two Grand Prize Winners.

It’s the ultimate NFL Draft experience and only ONE station is Dallas-Fort Worth is giving you the chance to be a part of it, 103.3 FM ESPN.